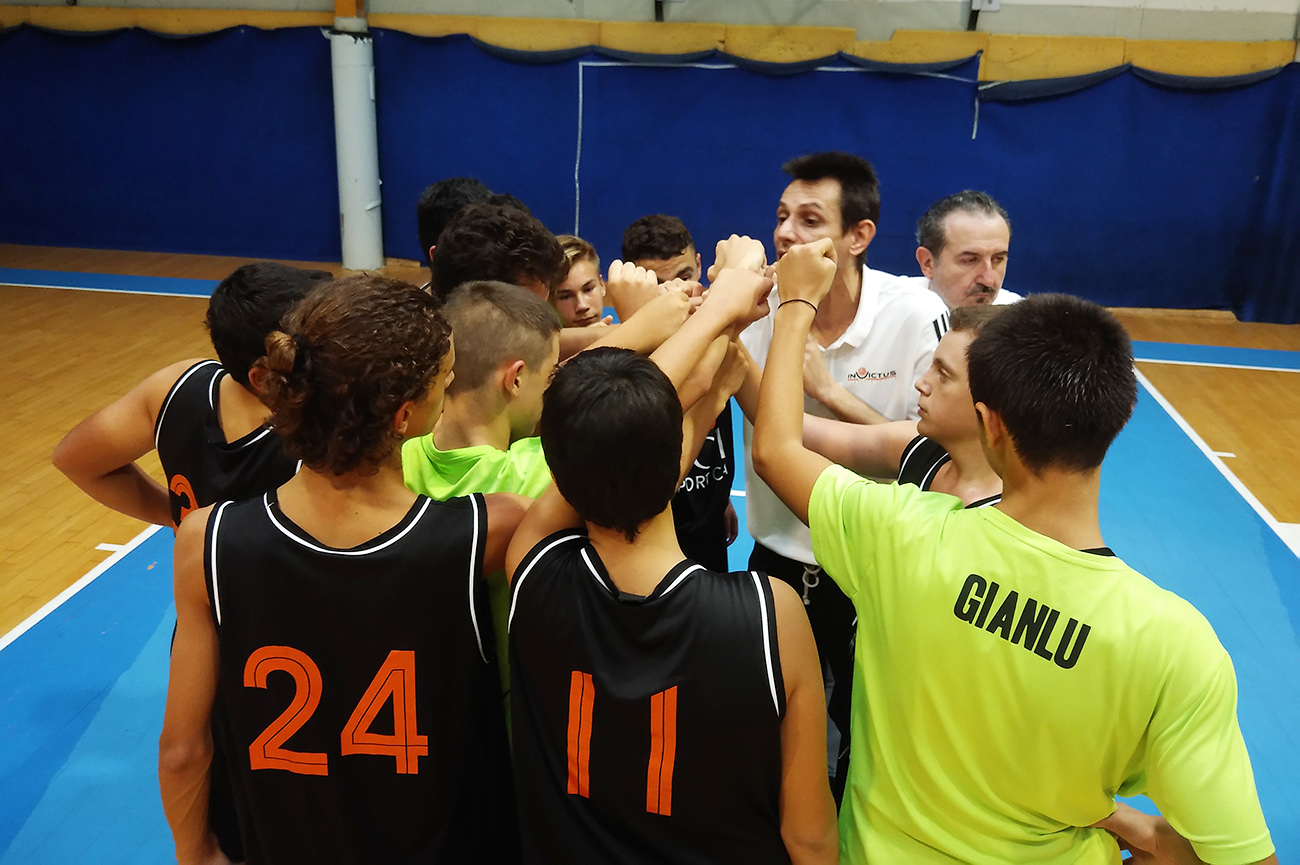 Saturday 5 October 2019. E 'taken the adventure of Under 15 Gold in the FIP Championship, Vintage training 2005 of INVICTUS Academy, completely new, recorded even before you know if there would be the numbers to put in the field, with the objective to complete the continuity between the youth sector groups, dai 2004 to 2007. On the bench Ugo Bartolini, arrived in the summer to be the Head Coach and forge group, the first decision made by the Technical Manager Marco Pappalardo, who wanted again to himself his mentor, deciding to join him to forge together this group.

In that space will feature the four players already last year along with 2004 (Gianluca Forino, Riccardo Zucconi, Ludovico Claroni, Luca Mazzoni, here will be Gianlu, Zucco, Ludo, Steph) plus seven new grafts, (Giuseppe Villani, Lorenzo Caroppo, Simone Pedrini, Alessandro Maggiore, Gianluca Fanti, Nicholas Baroni e Alessandro Cable, which for us will Beppe, Lollo, Simo, May, Kurt, Nicco ed But), more from time to time some 2006, that will be called to complete the group, as it happened in this first opportunity to max Frasca e James Rocchi (for us Max e Jack), who took the call as a further stimulus to uploaded them to the maximum.

It will not be easy, the adventure of this new team and we know it well. And this will become the main motivation for all children: they have before them a difficult path, an uphill climbers using the cycling jargon, and they will face this commitment knowing that the reward will come first from the individual growth and team, working together, it will be. At that point, the climb will have had a sense, one reason, a reason for being. It will be like having dealt walk (o magari, quickly) the climb to San Luca, something that is in the heart with each Bologna, a refill for the body and mind.

A climb to San Luca to be taken head-on, how our "Oranges" they immediately shown a willingness to do. Starting with the challenge "impossible" played at Palestra Deborah Alutto, a Salus Bologna Basketball, considered one of the favorites in the group, thanks to the run-core coached by Max Bacchilega, reinforced by some precious grafts of Virtus Bologna. A first step that led to a defeat that, pure, He has provided us with ideas and elements, processed with the right mindset, They may prove to be positive in perspective. Exactly who the two coaches have spoken in the dressing room and on the bench, and there will.

So, It is accepted 78-43 finale, a -35 enclosing two different batches. I get 12 ', played with the right attitude, that of David against Goliath, slamming in defense "stay there" from the first minute, finding the first basket after little more than two minutes on entry of Beppe of the 4-2, followed by that of Gianlu that converts the free throw (6-5), then another basket more foul, marked by Lollo (11-7) with attack bounce Gianlu sull'aggiuntivo wrong, transformed into the basket -4 (13-9) and followed by the coast to coast of Beppe to sign a 6-0 that forced opponents to timeout (13-11, a 3'07"). Broken break, the hosts have indeed regained control but without going away: new -2 written by Lollo (15-13), then -4 Beppe (19-15) e -5 of May sull'assist beautiful Simo for the 22-17 which it has a closed first quarter by applause.

In those first ten minutes beautiful, Initial gladly add those of the second quarter, sharing by the defense, by rebounds, and finding two perfect play: Defense closed forcing opponents to make mistakes a shot from outside, defensive rebound Gianlu, counter attack by Beppe that part in and download an assist to May (22-19, -3), and then another action founded on defense and leading to triple Beppe of equal, a 22-22 which means a lot, inside. Ie been able to overcome their limitations, to go beyond, to prove to be, and be ready to face the climb, no matter whether steep as that of Orfanelle. Then, the wind has changed on 6-0 opponent, Despite the desire to try again, Simo to score the incoming force that will remain the only field goal before halftime (28-24), the team to try to withstand the impact on defense, Coach to call timeout 3 'interval, to give directions but especially oxygen to his boys, and space field Max (2006), who became instantly find ready (39-24, with 17-7 partial).

The second half of the race, see him again "Oranges" to try, doing his defense, without allowing the opponents to fly away. With Gianlu kept on the bench for back pain and Max It deserved to stay in the field and continues to demonstrate the right face, Salus shares with a dangerous 6-0, threatening to go on the run (46-24). But we are not our, after 2'20" a great game on the break of three Beppe, May e Simo It leads to the basket of the latter, followed by the winning shot from six meters Lollo and assist by crushed Simo per Beppe, this time the 6-0 it's ours (46-30), the angle marks Salus, ma Max It throws in speed without fear!

It's a -16 heavy, 48-32, but still full of desire to do. follow a 8-0 opponent with two triples, but still we will not give up, with Beppe to mark incoming and throwing long for Zucco, that closes the fast break scoring around and shoot (56-36), then tears a defensive rebound. There still want to play without fear, There are still centimeters anywhere to conquer the field (citing the two Coach), Lollo attacks and is fouled, come in Jack (2006) and wins a defensive rebound, that Lollo It capitalizes on the other half of the field jumping in for the basket of -18 (56-38) which means until then 17-14 partial, However, undergoing a 6-0 spezzagambe in the last seconds of the third period, shame really (62-38).

Energie ended the last quarter, but we will try with all our strength. Everyone, Ludo there was already as Rambis e Nicco who have just arrived, without exception. From the defense are born good ideas, even if not capitalized, it does not matter. From rebounds born removing a possession added to the opponents and winning the battle of action. The cheers are for everyone, because they give everything they have. let us mark only 5 points - assists Beppe to the basket the average of May, assists Maxim for the support of the glass Zucco, plus a free throw Lollo - but still only we grant 16, until the final siren 78-43. Watching the game with a cool head, partial say we were there, the first and third "being there" (22-17 e 23-14) the second and fourth light without finding in attack, but clinging to the defense (17-7 e 16-5).

Behind the -35 finale, there is the awareness that he never gave up. He also said the spread of the individual quarters: -5, -10, -9, -11. There was no boarded without having found the strength to fight, there was no surrender. And it was still, We congratulate with Max Salus for a deserved victory, play reaping the applause and cheering of the incessant "our" fans: parents, brothers, sisters, grandparents, friends, friends, and many "Oranges" between 2004 (with birthday party Fabio improvised in the stands after the race!), 2007, 2008, 2009... Bello, so beautiful. This gives the sense of belonging, and it gives courage to those in the field. E 'an impervious ascent and just begun, that of 2005. Ma, at the end, will arrive in San Luca.