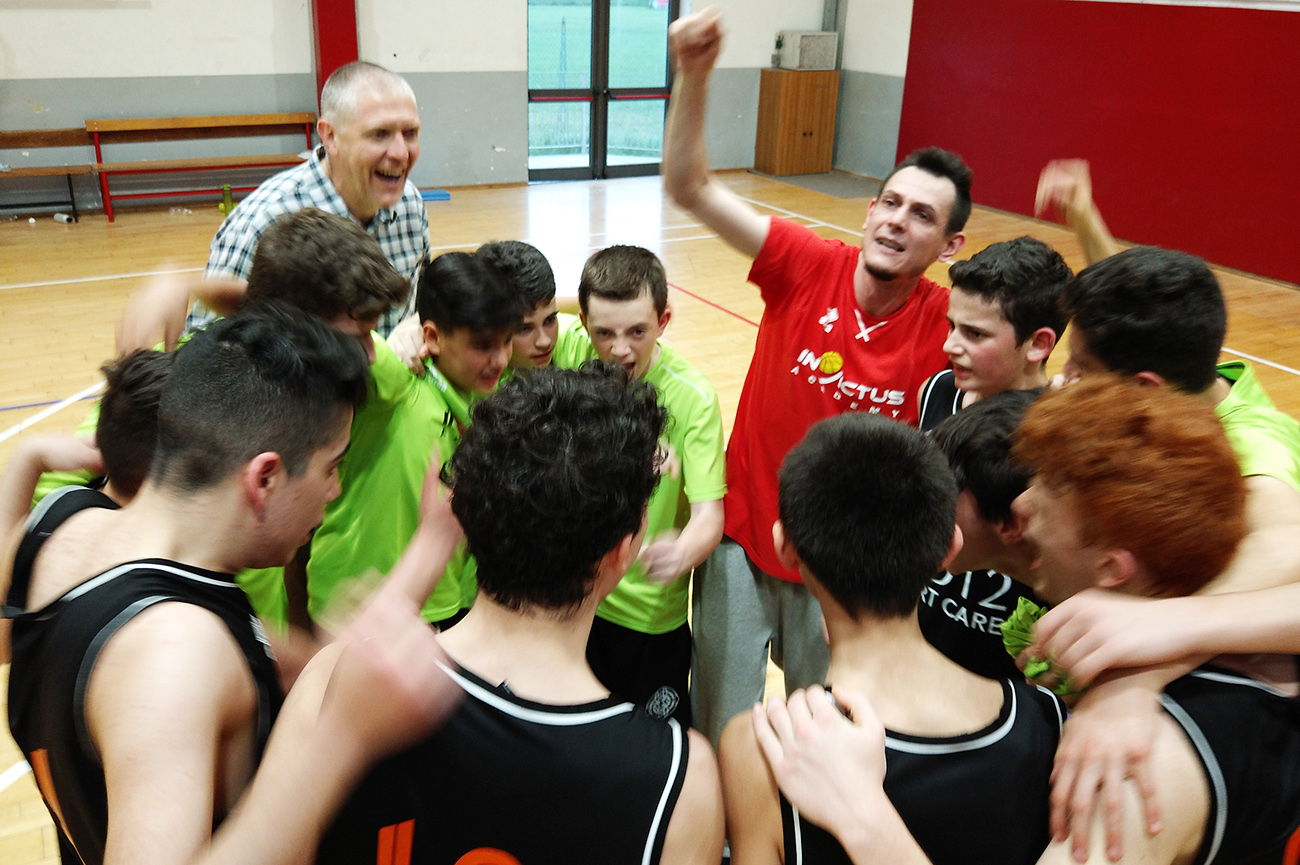 Friday 17 May 2019. strong's +27 in Gara 1 of Final Playoff Quarterfinals, the Under 15 Silver conquer the landing to the semifinals in the best way, also winning Race 2 away, in the field of 'Antal Pallavicini, per 71-74. And they do it in the best way, the "Oranges" of INVICTUS Academy, going into the field without thinking of the advantage gained, but only playing to win. This, the keystone of the game,, If we want, Team of the season. Something easy to say in words, but very difficult to implement in practice, who are the ones that matter most.

There's nothing for granted, so, when he lifts the ball two. If anything, rather, concern for some physical problems that reduce the rotations further, but that the Head Coach Marco Pappalardo and the Assistant Coach Giovanni Setti able to manage in the best way, saving those who could not play and instead try doing those in need to do so, as solutions by mixing stills of an alchemist. He will do it again, to recharge body and soul, but the mind is powerful and can find unexpected and unexpected resources.

The result is, so, the strength of the evidence BIO12 athletes, able to resist the forced attempt to escape the hosts in the first quarter, closed below 8 lughezze on 22-14, completely reverse the situation, releasing a second quarter with a perfect break 23 a 11 for the +4 interval, on the 33-37, and then playing against each other in the second twenty minutes, losing measuring the third period 24-21 maintaining the +1 of the 58-59, but winning the last period 14-16, for the win 71-74 and series 2-0. Behind the winning numbers, the mentality, the character, the determination, the motivation, enthusiasm, the desire to surprise, not to stop, to continue living his dream. Mind and heart, on the whole.

It was not easy, first against prior. Ma, as well as in 2-0 the Final Round of Playoffs against Benedict hundred had arrived +42 finale (starting earlier against third, winning out Race 1 of 11 then dominated Race 2 in house 31), the "Oranges" They were able to take a further step. Starting from the defense, made of intensity between defensive rebounds and recoveries, then fly in attack with play on the counterattack, but also attacking the defense fielded by turning the ball better.

Without any calculations, we said, but aiming solely to win. It was a special training session ahead of the next stage, but above all in its path of growth. Now, team and club are expected to walk more, because there is something that goes beyond the field. E, fundamental as were the boys of the group 2004 e 2005 in the field, the others were equally "Oranges" came to cheer, gives Maxim e Luca (2006) a Riccardo e Filippo (2007), a Claudio (2008) e Alessandro (2009). Increasingly "fluorescent green" the stands, more willingness on the part of parents to "team up", and in the end are the things that matter most.

No need to say more, if you do not return to the field to prepare for the new challenge. It will be back first against the first and, as against Pallavicini, It will again be a challenge to win against those who, in season, It did better. in the quarters, it was a few tenths in the baskets Differential, equal win-loss (18-2). In Semifinal, He will face the Basketball Correggio, undefeated all season: 20-0 in the First Phase, 2-0 in Group C and 2-0 in Quarter Finals, against our 18-2, 2-0 e 2-0. It will still outdo, go one better, play only to win.