UNDER 15 SILVER… WE ARE CHAMPIONS! 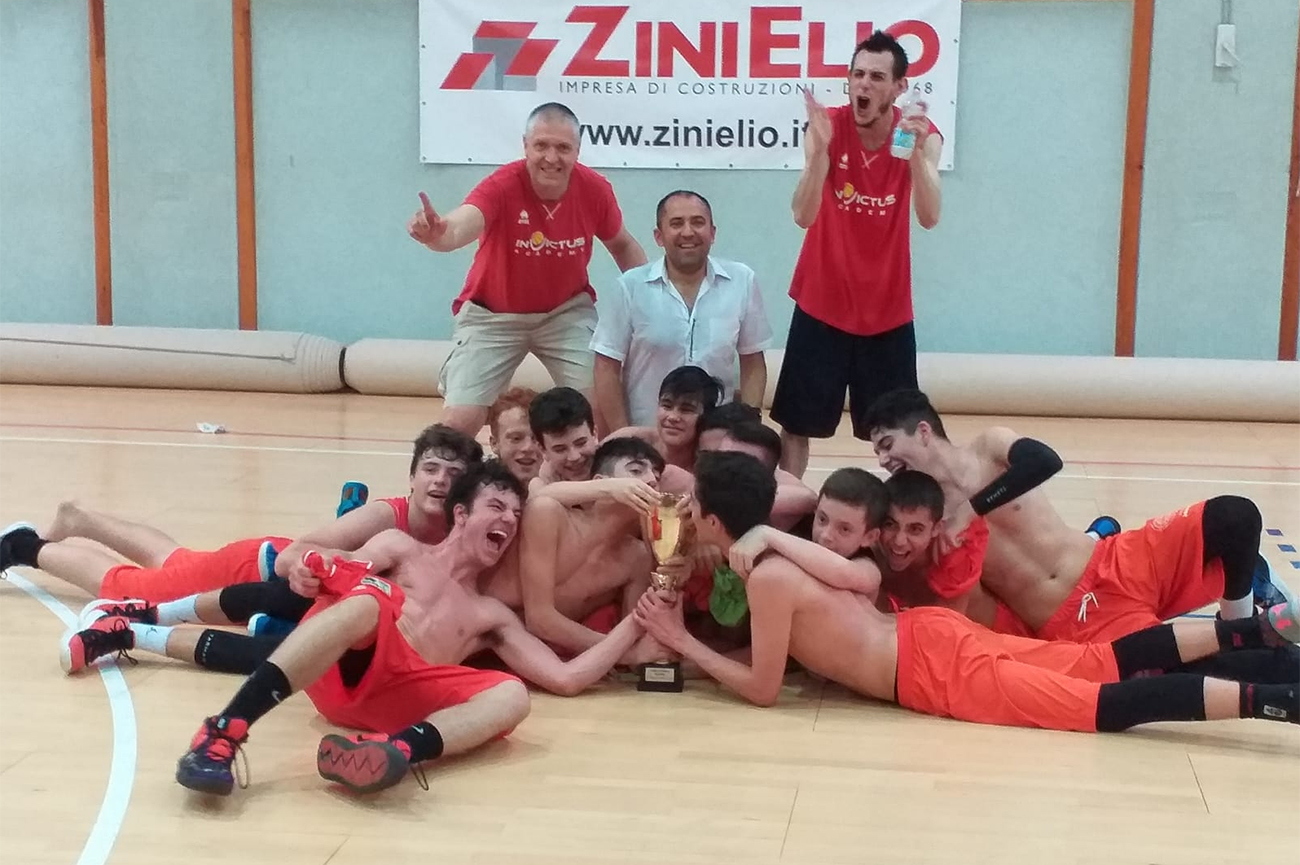 UNDER 15 SILVER… WE ARE CHAMPIONS!

Sunday 9 June 2019. Castel Bolognese, the Romagna. The dream has come true, the dream became reality. And the reality is even more beautiful dream ... The Under 15 Silver of INVICTUS Academy win the final against Baskers Forlimpopoli per 70-69 at the end of an extra time, winning the title of the Italian Basketball Federation for Emilia-Romagna. The first, in the history of the Company, in his first year of competitive activity. The first as Head Coach (with membership card from National Coach, since last summer!) per Marco Pappalardo, the man who gave identity, character, enthusiasm, mentality, sacrificially to this team. Somthing born in the mind, that in nine months resulted from the dream to its realization.

The first for all children, our "Oranges", ranging immediately called in field, as always in mesh order, because each of them was crucial and the protagonist of this victory ... Filippo Fabbri, Gianluca Forino, Ludovico Claroni, Nicola Monzali, Matteo Guidi, Riccardo Zucconi, Diego Mascagni, David Aldo De Pace, Christian Carmelo, Luca Mazzoni, Fabio Pinto, Matteo Baldi, Mario manly. And we add two more willingly their "teammates", Teo Vojnovic e Bryan Ebeling, because the days spent together in April at Rimini were key, immediately they became an integral part of the group, and their contribution made to improve on the team.

Essentially, it was the role of all the Technical Staff, Giovanni Setti He has put his experience of Serie A, serving as Assistant Coach to Under 15 Silver and to Under 13 Elite, When Andrea Gatti It had to take an extended break for business, and fundamental was the arrival of Francesco Del Santo in January as Athletic Trainer. But the team joins Youth sector e minibasket and anyone who knows Luca Brochetto He knows what his contribution is fundamental in a society, the memory of an early season dinner to share ideas with the other coaches there remained imprinted, as well as the date growth simultaneously in Ivan Cicchelli to Debutant, that in terms of Eaglets It was flanked by Cristiano Tronconi.

We take the opportunity once again to thank the guys in the other groups, for that sense of belonging grown exponentially in recent months, when Under 15 Silver they could count on the thrust of the cheering of the other guys from the green fluorescent sweatshirts (color combination that has made headlines), and we thank all the parents. Some also came in Castel Bolognese for Finale, others celebrated outside the Palau Blaugrana in Barcelona, others through groups of whatsapp ... The victory belongs to everyone, not only of a group. And the news of the first title immediately bounced from Castel Bolognese in Barcelona, a Dubai ("Won easy 1", the message of Zoran Savic, remembering other hard fought games), in Bologna, in Montenegro, in Macedonia, wherever there is someone who identifies with INVICTUS Academy.

We like to mention also Patricio Prato, who joined the trip to Barcelona over 24 hours since we met to begin to talk about the future, and thanks to him was born the relationship with Luca Deiana, owner of the company that produces BIO12 athletes, came in Castel Bolognese with her daughter Nicole, curing Instagram profile @ BIO12SportCare, with the "sorry" a journey towards Rome. He made us extremely pleasure, because everything comes from the enthusiasm, and this has all the flavor of something more than just a sponsorship, It is based precisely on the enthusiasm of creating something new, not only because in Bologna, mostly, internationally. We'll tell you more, soon ...

The mind recalls some "flashback"... The first is the winter of 2013, when the dream was ready to be born, then forced to stop suddenly, to be reborn (thank goodness) the winter of 2015. When we founded INVICTUS BOLOGNA A.S.D. summer graduate school with plans to INVICTUS Camp. There, it all began, the choice of Zoran Savic to stake everything on the name of Marco Sanguettoli, the technical staff that "Murphy" He drew, personally choosing all Coaches. A group that still, five years later, She continues to be regarded as such, It based on human even before that technical qualities. And from which the project was born of INVICTUS Academy, with Marco Pappalardo e Luca Brochetto as points of reference.

From past to present ... The mind goes back to Final, who had crazy intense moments. The real victory, for us, We had already arrived there, against the initial forecast. It all started by sharing a choice, everything is born from spontaneous trust that the boys and their families have made in the draft INVICTUS Academy, that all of them had the face, the movements, the heart, the mind of Marco Pappalardo. The first person with whom, Years ago, we began to fantasize about going over ... The first who are going to embrace when the final buzzer marked the conquest of the title from our Under 15 Silver...

An endgame with a strong inner charge, that allowed "Oranges" to take early lead, closing at +3 the first quarter (19-16), a +11 The second one (35-24), then go up to +15 in the first minutes of the third quarter. Then, the reaction of Baskers, able to equalize the third siren (45-45). And then to overtake, +4 beginning in the fourth quarter ... There, in the most difficult moment, Coach has touched the right chord, inside his players. The heartstrings, passion, the coldness, of madness. That reaction of yet, the hang-up, illusion of having almost won, the desperation to contend again, forced overtime (63-63). Exhausted physically, with repeated injuries, but able to make a firm. That to resist, to defend yet, to attack again, to score one more point. To win the title, 70-69.

The exultation in midfield, the embrace with opponents that they deserved the same way, the joy that never ends ... Continue in the locker room, a shower that none of us will forget, and continues outside PalaSport, with a bottle that allows us to toast ... And dinner on Castel Bolognese hills, into the night. In the car, My Alessandro, 2009, It reminds me of the difference of the first league game, Budrio lost just one point ... From that -1 He did this +1.

As a circle that closes. As the Land Rover Arena Bologna, from where it all started, and where we returned. As Barcelona, to live Zoran Savic and where, in September 2010, she's born INVICTUS. Without even being able to imagine what would have happened, nine years later. If not for the coincidence (which is never that) to find myself in Barcelona, Debutant invited to a tournament that has filled us with enthusiasm, from where they flew to Bologna as not to lose the Final Under 15, ready to go back there. A circle that closes, the dream became reality. A more beautiful reality of the dream.